Sharon Faetsch is a popular anchor and host who is popularly known as the former host of America’s one of the largest broadcast shopping channels, Quality Value Convenience(QVC), which she left after 15 years of service in November 2018. Faetsch gained much popularity as the face of the QVC for over 15 years, which she left for her children to spend more time with them.

Sharon also worked as a singer for over 6 years before she began working for QVC. Besides, she is quite active in the social media site with her Instagram: @Sharon Faetsch and Twitter: @SharonFaetsch.

What is Sharon Faetsch Famous for?

Where was Sharon Faetsch Born?

Sharon Faetsch was born on January 17, 1974, in New York, United States. Her birth name is Sharon Faetsch. Her nationality is American. Sharon belongs to White ethnicity while Capricon is her zodiac sign.

Sharon was raised in her hometown along with her sister, Barbara. She is very close to her family as she often shares photos with her mother, Jeanne Faetsch. Sharon had an interest in music since her childhood as she even studied classical music for 7 years at the time. 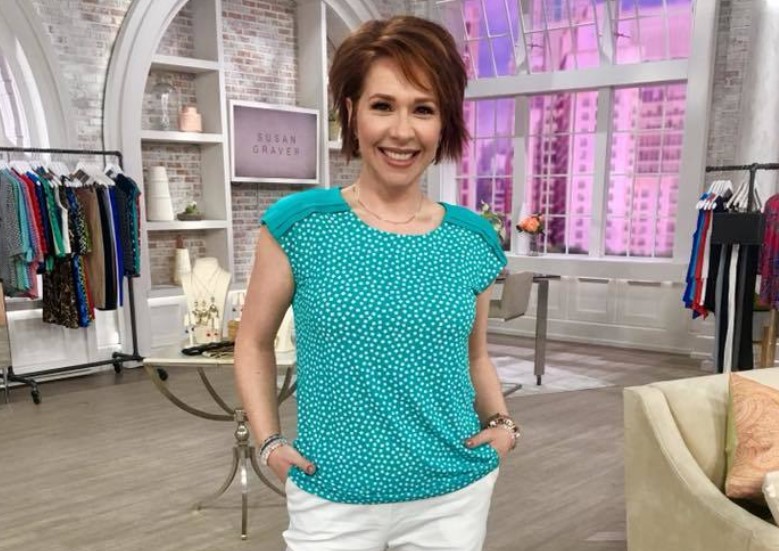 Sharon Faetsch has marked her presence in the entertainment industry with her breakthrough career as a host of America’s one of the largest broadcast shopping channels, Quality Value Convenience(QVC) in 2003. She remained in the show business for over 15 years becoming the regular face of QVC. However, she left QVC in November 2018, to spend more time with her children.

Sharon announced her departure from the show through the television in the first week of November and later took to Instagram to re-announce the news in mid-November.

Before this, she had worked at Paramount Parks in Sin City in 1998. She also landed herself in the cast of the blockbuster, “Star Trek: The Experience” during the late 90s. Sharon worked in Farrington Entertainment and Productions based on Las Vegas from April 1999 through December 1999.

She had also worked as a performer at the Excalibur Hotel Casino in Las Vegas in 2001 till she joined QVC in 2003.

Who is Sharon Faetsch Married to?

Sharon Faetsch is married to her long-term boyfriend, Langdon James, with whom she has been living for 16 years now. James is an entrepreneur, also a stand-up comedian, and a founder of a digital marketing company called “BuzzTown Digital Marketing”.

The couple got married in a great wedding attended by their family and friends on May 21, 2002. They together share two children: a daughter, Kaylee(b. 2007), and a son, Desmond(b. 2009). Currently, Sharon, her husband, and her children together live in Philadelphia.

How Tall is Sharon Faetsch?

Sharon Faetsch is a beautiful lady in her 40s. Sharon has a maintained average body physique. She stands tall with a height of 5ft. 2inch.(1.57m). She has a fair complexion with brown hair and brown eyes.

What is the Net Worth of Sharon Faetsch?

Sharon Faetsch has quite great earnings from her career as a host and anchor. As a host of the popular shopping channel, QVC, for over 15 years, she had managed to amass a million worth fortune from her each episode. Her estimated net worth is around $1 million.

Besides, her salary while working at QVC was around $47,000 per year. With a million worth fortune and properties, she has managed to live a lavish lifestyle.